(1)      The Samuti Samghas stayed and performed the Samgha affairs and the dispensational affairs  at  the  religious  assembly  halls  which were  built  at  the  same time  when  the  Yadanabon  capital  was  established  and  the  Fifth  Buddhist  Synod was convened during the reign of King Mindone. Some other Venerable presiding Monks  and  their  attendants  who  could  not stay and attend at the religious  assembly hall had a permission to exist themself seperately as they appealed to perform  religious  affairs.

(2)      The original Samuti Samghas who were called ”Sudhamma Gaing” because they  performed  the  Samgha  affairs  in  Sudhammar  Zayatt  were  regarded  as  Synod Sects and the Sects of other separate Samghas were named according to the traditional opinion  of  respective regions.

(4)      Thus before the time when Myanmar became independent, the Samgha of Sudhamma-Sect  together  with  the head  of  religious  Order,  great  head  of Sect  and  assistants of  the head  of  Sect  performed Samgha  affairs  according  to  the disciplines lieu of  Venerable presiding  Monks. Also the Sects of Shwe kyin, Dwara and Hnget-twin  performed  the  religious  affairs  according  to  the  respective  disciplines of  their  Sects  and  advise  of  their  presiding  Monks.  After  Myammar  country became independent at 1949, They made Vinicchaya Act (1311) to settle the Vinicchaya cases Vinicchaya  Department  Act  (revised) (1316) in 1955  and  (Vinicchaya  Department and  Vinicchaya  Act)  were  prescribed  and  the  Samgha  Vinicchaya  cases were  settled by Samgha Vinicchaya Committees. But above acts were not effective and failed in settling the argumentations of Samghas each other and in supervising Samghas whether they are living according to Samgha Vinicchaya disciplines. Therefore  in  1965,  the  Revolutionary  Council  withdrew  these  acts  by  act (1).

(5)      Then some Samgha did not practice and live according to Vinaya principles, preached Adhamma Vada instead of Buddha Dhamma Vada, doing unsuitable actions unfearfully by naming ” Mission for Sasana” near the fancing around of great Pagodas performed boldly the tasks  which  were  not  informing with Sasana, naming the  propagation of  Sasana,  and  pretending  themselves as real Monks, walked round and asked for donations  along quarters  and  towns  without  being  ordinated  in  the  buddhist  ordination-halls.

(6)      In performing all the tasks of Buddha Sasana, the Samgha Committees at all level which have to supervise Samgha each other are very important to exist as a central pillar. Therefore, according  to the  aggrement  and  permission  of  the  meeting of  cabinet  ministers  held  on  November 14, 1979, the  Minister  of  the  Ministry of Home and Religious affairs managed to hold the meeting of all Samgha Sects consisting of Samutti Samgha  representatives. To prepare  for  the  effectiveness and success of this meeting (66)Venerable  executive  Monks  were  organized as a base committe  and  then advicing committee.

The thesis committe which has to specify the quality and quantity and ways and means of Selecting Samutti Representative Samgha, formality Drawing Committee consisting of (20) executive Monks which has to draw formalities for settling Vinaya Dhamakan crisis cases  and Sasana identity card drawing etc, were formed.

(7)       Although  all  the  Theravada  Buddhist Monks in Myanmar are similar in praticing  and  living  according  to  Vinaya. They exist in the respective Groups or Sects under generation of their teachers. Therefore  for  existing of  Samgha Committee consisting of Samgha  of all Samgha  sects, 66-Venerable presiding Monks, by collective and mutual above and under consultation, held first meetting of all Samgha  Sects  for  purification,  stability,  and  propagation  of  Sasana  starting  from 10th  waning  of  the  Moon,  Nayone Month, 1342 (Myanmar year), 2524 (Sasana year) to 26th May (Saturday) at  Kabaaye  Mahapassanna Cave, Yangon. 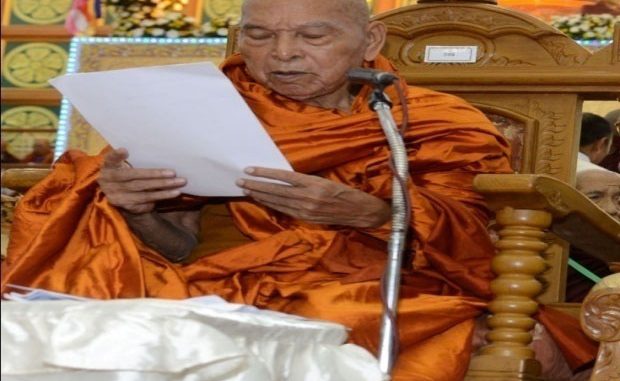 The view of The Chairman of State Samgha Maha Nayaka Committee, Venerable Dr. Bhaddanta Kumara Bhivamsa (Bhan-Maw Sayadaw) is declaring Admonitory Speech in the Fifth Meeting of All-Sect of Samgha