Then the US Embassador asked thus: “I would like to know the relationship between the State Samgha Mahanayaka Committee and the Government.

The Meeting was closed at 10:00 AM after discussion of the two side. The Executive Venerable Sayadaw Baddanta Candimar Bivamsa, the Director U Tun Nyunt of the Department of Sasana and Viniccaya Affairs ,the Ministry of Religious Affairs and Culture, the Deputy Director U Wai Lin and The officers of Department of External Affairs  attended the meeting. 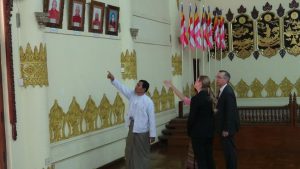